Press for the printable word 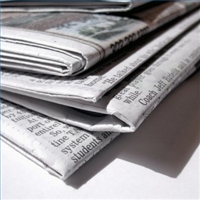 Let’s leave aside the obvious question: You mean there were unprintable words the paper wanted you to know?

Dictionary.com picked 10 words, including ‘meslimatic’, ‘souse’, and ‘nonpareil’. Yes, it did seem the ‘Gray Lady’ was without equal in asking her readers to have a dictionary nearby as they read. Not to feel ‘schadenfreude’ (another gem on the list) for the New York Times … but I wondered whether other newspapers were in the habit of using such words regularly?

So I did a quick review of the Monday 15 August issue of The New Zealand Herald. And what did I find? An article about a little adidas public relations problem, with embroiled, frontfoot, and alignment. Yes, I know the last two are quite witty. But the opinion pieces had proximate, malaise, vindicating, and coalesced. Maybe a word in the ears of future contributors will meld mind to pen.

And if a writer must use a complex phrase about childcare or economics, why not explain it in context? For ‘wraparound services’ , why not a process to care for youths with complex needs? And isn’t ‘taking a gradualist approach’ merely saying ‘it’s slow going’? Well, articles with this type of phrase certainly are.
And why do we still see ‘in order to’ when ‘to’ will do? It’s not that I am wishing to ‘carp’ or to be ‘sardonic’ (another two from the New York Times), or even be Seussian, but this really will not do.

I know we expect a broadsheet to be wordier than a tabloid, but with less time to get the facts and more sources for news, shouldn’t content be clearer?
Posted by Meredith Thatcher at 10:25 AM No comments:

On the subject of passion

I'm consumed with admiration for David Mitchell's views about passion...

Email ThisBlogThis!Share to TwitterShare to FacebookShare to Pinterest
Labels: David Mitchell, passion, passionate about, the importance of passion

The pen is (still) mightier than the cursor

It’s reassuringly bewildering — does every parent think that?

There is information about things that weren’t a concern when I went there 41 years ago. (Yes, he’s going to my old school.)

There are two computers per class – Macs no less – and a couple of pods of laptops that classes can book for projects. (How many laptops in a pod? I've no idea, but when I find out, I’ll let you know.)

There’s stuff about sunhats in summer and telephone trees in an emergency.

There’s familiar stuff, like the Scholastic Book Club (hey, neat, I remember that!) and order forms for lunches. (Phew, I get a day off lunchbox duty!)

Finally, stuff about what he’ll be learning
On the last two pages, I came to something really, reassuringly familiar — and vitally important: two pages of the alphabet, upper case and lower, with the penstrokes of each large letters carefully numbered to guide the learning child.

With computers on tap, I am relieved that handwriting is still on the curriculum, taking its place alongside lessons in using the internet.

My 11-year-old niece can write a beautiful thank you card. But she says she finds it easier to text or type.

In the event of a catastrophe…
The keyboard, mouse and keypad have taken an inalienable place in our world but the place for handwriting hasn’t gone away. When the network fails or the battery dies, the only tools we have for recording information will still be pen and paper. When milk costs too much to buy, let alone the $800 for an iPad, you’ll still be able to afford a Bic and a Jotta.

Life and death
The importance of clear handwriting as a tool for clear communication cannot be overrated. It’s a matter of life and death – just ask a pharmacist, struggling to make out the 5’s from the 2’s on a scrawled prescription.

There’s something eloquent and obliquely revealing about good handwriting, that you just don’t get from choosing a nice font.

I will study the alphabet in the enrolment book carefully. I look forward to using it to show my son how to bend the unruly pencil to his will.

The pen is no longer mightier than the cursor, but its day will not be over for a long time yet. Maybe never.

They say that no matter where you go in the world you’ll find a New Zealander. And, more likely than not, that New Zealander will be holding a new black biometric passport, with navigation and travel as its core themes.

A quick trip back in time
In the beginning there was the manually read passport. Then came the more reliable machine readable passport, and immigration officials could process arriving and departing passengers more quickly. Today less than 4% of New Zealanders hold non-machine readable passports, and the New Zealand passport has evolved yet again. It morphed into a biometric passport on 2 September 2008.
This latest passport has an embedded electronic chip that holds facial biometric identifiers. You can see the chip in the symbol on the front cover and in the polycarbonate leaf inside the front of the passport (where you’ll find the chip).

An effective and smart design
Yet the new New Zealand regular passport is smart in other ways. It shows how you can increase information on many layers, yet decrease document size; how you can introduce new themes and artwork, yet keep a document consistent and cohesive. Indeed, it is a great example of content and design coming together in a tightly controlled format.

The design is even smarter when you think that you open it without dwelling on the work behind the design—the research, complex file setup, detailed illustrations, and layout work that went into crafting the Clemenger BBDO-designed passport. All you see is the final effective and smart design.
Instead, you get a story (in English and Te Reo Māori) that develops with each turn of the page. It has constant images that form repetitive patterns (ocean, clouds, and the kōwhaiwhai border) showing how New Zealanders found their way to the land and are framed, yet not constrained, by it. 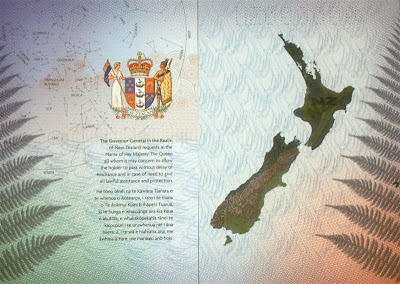 Other elements progress the design. We see the colours change from purple to orange to green to blue, from dawn to twilight. We see aerial views of sea and land and the Southern Cross move across the sky, as we chart navigational techniques. And this process gets repeated as New Zealanders renew their passport every five years.

The New Zealand passport has become a well-made thread that ties New Zealanders to the fabric of home as they fly or sail beyond its shores to other lands. If only all documents could look and travel so well.

If you want to know more about the design elements on each page of the New Zealand passport (and what they represent), visit http://www.passports.govt.nz/Passport-Design-Story

If you want to know more about what goes into a passport’s content, visit the International Civil Aviation Organization’s website and view Document 9303. It is available in the six UN official languages at http://www2.icao.int/en/MRTD/Pages/Document9303.aspx. Document 9303 has the current ICAO specifications for travel documents (including machine-readable passports, visas and ID cards) used when crossing borders. But note that not all countries follow the specifications.

Do you know about noun strings? No, I didn’t either, until I joined Write.

Now I have a name for those occasionally bewildering successions of nouns that have me reading and re-reading, puzzling over what they mean.

Sometimes noun strings absolutely don’t mean what they say. Do ‘community-based family violence service providers’ bash you up if you ask? Of course not. They do important work reducing family violence and supporting its victims. But that’s not how it reads.

Or you can untangle the string to make it easier for your reader to string together your meaning. Write a phrase, not a series of nouns.

When you’re busting noun strings, keep an eye out for nouns that could be verbs. The writer has turned a verb — implement — into a noun — implementation. Look out for ‘-tions’ and ‘-ments’ and turn them back into verbs.

Your sentences may get longer. But this isn’t about word count. It’s about clarity.
Posted by Inez Romanos at 8:25 AM No comments: