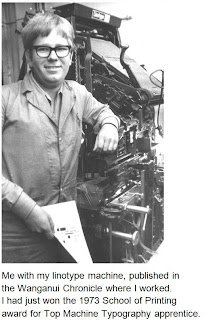 Jack, our Client Services Co-ordinator, is no stranger to the written word. An article online has brought back memories of typesetting at the Wanganui Chronicle. He writes:

Memory of times past
With much enjoyment I read the Dominion Post article about the printing museum finding a new home.

In the article, Bill Nairn is pictured sitting at a typesetting machine (the erroneous caption on the website version refers to it as a printing press).

Setting slugs and dodging splashes
This Linotype machine enabled a character matrix, together with spacers that justified the line, to cast a ‘slug’ — a line of type. (That’s why these machines are called ‘linotypes’.) Each slug was created when a mixture that was mostly molten lead was forced into the mould, casting one line at a time.

The end result was rows of type that were assembled and inked. Paper was then placed on top and pressure applied to transfer the ink. Letterpress was born.

All Linotype operators have memories of ‘splashes’. These happened when the row of matrix were sent to the casting wheel and didn’t align with the mould. Skilled operators knew what was about to happen.

Real machines needed running repairs
Batteries of these machines lined the composing room of newspapers and commercial shops worldwide. Each required maintenance like any other machinery. Many moving parts such as cams, belts, slides, rails and the melting pots all needed attention to enable the machine to function best.

Labour intensive, each had its own character and a good operator produced millions of Ems and Ens of text during his time as an apprentice or a journeyman (not gender inclusive because it was very much a man’s trade).

Today most people understand that toner miraculously sticks to the paper, with no smudging, and copier problems are more about paper. Progress has brought us a long way.


Footnote: The first 12 of the 91 keys on the Linotype keyboard are etaoinshrdlu, a syndicate name I put on my weekly Golden Kiwi ticket. I never won a major prize, so no announcer ever had to try to pronounce it!

Poor writing is not sustainable

Too many New Zealand businesses don't realise the huge impact unsustainable business practices are having on their bottom line. That was the clear point that Sustainable Edge consultant Annette Lusk made in a recent column on the Stuff website. ('NZ businesses behind in sustainability').

Too many businesses see sustainability as something that's 'nice to do for the greater good', she says, rather than something that has a huge impact on profits.
So true. And sustainability is about much more than just recycling your rubbish and using eco-lightbulbs. It's also about not wasting people's time and energy.

Not many people see their writing as part of their sustainability efforts, but in fact the words you write in any business come at a cost. When your people take too long to write something, or what they write doesn't do the job well, your production costs soar. You can measure that loss of productivity in wages and salaries, and in the resources you're wasting (ink, paper, hardware, and so on).

But poor writing is also costing you in other ways. Staff may take longer to understand and act on emails or instructions; and reports may have to go through many versions. Your clients may lose trust and loyalty if the way you write doesn't tally with your business brand and image.

Every business has a voice, and if your writing is letting you down, you have a problem. Poor writing is wasteful, and unsustainable for your business.
Posted by Diana Burns at 4:16 PM No comments:

We went to the recent launch of the New Zealand Government Web Standards.

The standards aim to ‘promote, establish, and ensure accessibility of the web’. They set standards for accessibility and usability for most government websites and intranets.

The standards replace an earlier set that was trickier to administer and update.

Rollout from 2014 to 2017
Government ministries and departments must begin to comply with the guidelines now, with a deadline of 2017. The order in which they attack the task depends on how ‘high stakes’ the web pages are. For example, these pages must conform by June 2014:
Usability and accessibility
Some parts of the standards are technical, and some are simply common sense. They’re split into standards for usability and accessibility.

The standards aim to deliver usability for all. For example, they standardise the basic information required for a government website. Each site must have a link to newzealand.govt.nz, a ‘contact us’ page with standardised information, and pages on copyright and privacy.

They also specify requirements for accessibility, so that people with disabilities can use the websites without barriers. These standards comply with national and international conventions and acts.

Learn more, read more
In our Web Lab we’ll include how to apply these principles to any website.
Read about Write’s Web Lab

I went to see the latest show at Circa Theatre a few days ago. It’s called ‘C—a musical’, and it’s about the writer and director Paul Jenden’s experiences with cancer. At least, that’s the easiest way to describe it. Really, it’s a funny, touching, surreal, and rather outrageous show about how Jenden got through a difficult time, and how his fantasies helped him.  It also has divine music, composed by the talented Gareth Farr, a long-time collaborator with Jenden.

It’s a brilliant show, and deserves to be a total success.

But it has a problem—it doesn’t fit easily into any known genre, so it’s hard to categorise and describe. I was talking after the Opening Night to Danny Mulheron, a well known comedy actor who plays Jenden in the show. ‘I wish Paul had called it ‘Fantasies of Venice’, sighed Mulheron. ‘That would appeal better to the punters who think a show about cancer is going to be heavy and sad.’

That started me thinking about the importance of titles, and how much we human beings like to put things into boxes. We seem to feel safest when we know what to expect, and how to categorise things…even if those boxes and categories don’t entirely fit.

How do you describe something that falls between several categories? Especially if you have to catch people’s attention with just one pithy phrase? That’s the communication challenge ‘C—a musical’ faces. Most of us fall back on stock phrases like ‘It’s terrific’, or ‘really worth seeing’.  We may even say the show took us by surprise, or really moved us. All of that’s true. But there’s so much more to say. You’ll just have to see the show so you can categorise it for yourself.
Posted by Diana Burns at 2:13 PM No comments:

Feeling sentimental last night, I read through an email I sent friends when my baby was 2 weeks and 4 days old. I was horrified to see I hadn’t followed my own advice. I’d filled my writing with adverbs — ‘a most beautiful little creature’, ‘exceptionally relieved’ (my partner), ‘completely paranoid’ (me about baby-stealers), and the crowning glory: ‘liberally decorated in facial acne’ (the baby, not me!).

I bet I justified my fluffiness at the time by telling myself Hannah was worth every adverb in the world and more! But looking back on the writing, it comes across as sappy and drippy; nothing like my real-life personality.

I vow to never, ever, ever write an adverb again. Unless it’s absolutely, positively, unequivocally necessary. 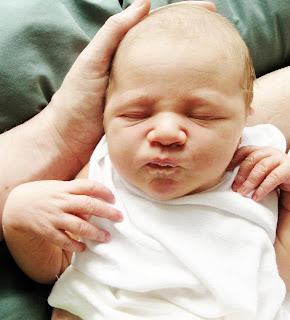 A visit to my sister's work

Jacinta’s students were giving each other 5-minute presentations about their countries — great speaking practice for those presenting, but the listeners could easily have tuned out. Jacinta kept them involved by noting down facts from the 5-minute talks. At the end of each talk, she used her notes to ask questions that the students could answer — if they’d listened.

That simple trick meant she had 100% of people engaged in the activity. Brilliant.

The experience gave me renewed respect for foreign people who have jobs in New Zealand. Imagine conducting business in a foreign language! Negotiating the subtle nuances of workplace politics can baffle people who are born here, let alone people who come from overseas. I take my hat off to anyone whose job requires them to write in English when it’s not their first language.

Posted by Colleen Trolove at 4:37 PM No comments: