Man is a curious animal... 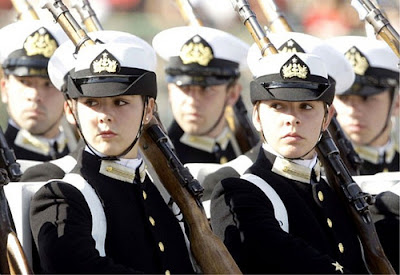 Last week, Johnson posted on gendered language. If our workshop participants are typical, many of you have views on this topic. Here's a taste of what Johnson had to say:


In the history of English and other languages, men have magnanimously declared that grammatically or semantically masculine words could include women. In grammar, the traditional view is that the male pronoun is sex-neutral in sentences like "Everyone should find his seat and take out his notebook." And the scope of "man", "mankind", Jefferson's "all men are created equal", it was explained to women, included them too. But this has been a cause for feminist chagrin in modern times. Feminists and those hoping to avoid annoying people along these lines cautiously opt for "people" or "humankind" in place of "man" and "mankind".

More specific terms have been contentious too. At one point in history, "policemen" and "firemen" were not controversial because there were no policewomen and firewomen. Now, "police officers" and "firefighters" are the generic plurals of the day. But the conversion to sex-neutral terms has been patchy and inconsistent. The lowest enlisted ranks in America's navy are "seamen" — regardless of the sex of the sailors in question. The same applies to "airmen" in America's air force. Britain's Royal Navy has only "seamen" — but the Royal Air Force has "airwomen" as well as "airmen".

Other traditional terms are in similar disarray. Female Hollywood types are "actresses", uncontroversially, but many women of the serious New York stage call themselves "actors". No self-respecting female writer of verse calls herself a "poetess" any more. "Waitress" is holding its own against "server", but "stewardess" has quickly yielded to "flight attendant". "Hostess" is harmless but "mistress" is tainted.

Posted by Judy Knighton at 9:53 AM