If you're a business or government writer, it's a fair assumption that you want people to understand what you write. If you've read a lot of business and government documents, that assumption may take a battering.
In Writing for dollars, writing to please, Joseph Kimble gives three reasons why writers fail to write in a way that works for readers: 'lack of will, lack of skill, and lack of time.' We agree.

If you have the will, but not the time, you might need help to look at your document and understand what's wrong and how to fix it. You can fill that common skill gap by commissioning user testing and document assessment.

The two techniques reinforce one another, and we recommend both.

It's easier to show you than to tell you more - take a look at the user testing and WriteMark assessment report we included in a recent submission on KiwiSaver Regulations. (The link takes you to the website of the Ministry of Business, Innovation & Employment.)

Here's what you can expect from such a report.
Read more about Joe's book in Steve O'Hagan's review, which we posted last November.

Posted by Judy Knighton at 9:19 AM No comments:

We’re delighted to have hosted Sandra Fisher-Martins, a leading light in the world movement for plain language. Sandra has a business in Lisbon, and also runs an advocacy campaign and offers a ‘plain language seal of quality’.

We’ve met Sandra at Clarity conferences in 2010 (when it was held in Lisbon) and 2011. She’s in New Zealand to visit family, and made a side trip to talk plain language with us.

Frustration and fairness
Frustration drove Sandra to establish Portugal’s first plain language consultancy, Português Claro, in 2007. Sandra says she is ‘passionate and stubborn’. ‘I’m moved by a sense of fairness.’

Her own experience got her thinking. When she returned from London to Portugal, she did all the things you have to do when you move — get somewhere to live, sort out the utilities, get insurance… She found the forms really difficult to understand. ‘I thought to myself, I’m struggling with this and I’m intelligent. I’ve got a good education. Why does it have to be like this? I have to do something!’

Sandra has a newspaper ad in a frame on her office wall. ‘It says that you can pay less social security if your earnings are low. That’s great. But the language it uses is complicated and legalistic. Very few of the people who could benefit would be able to read the ad!’

Sandra speaks about the social impact of language in her TEDtalk 'The Right to Understand'.

A Portuguese WriteMark
She and her husband James have also established an advocacy organisation, Claro. Claro has its own version of the New Zealand WriteMark — a quality mark for plain language writing. It’s called the Selo Claro, and it’s been awarded to Portugal’s state roading agency ANSR, and television company ZON.
Posted by Inez Romanos at 10:03 AM No comments:

What I read in the holidays

Here at Write, we're great readers. During the working year we don't often get the chance to read just to relax. But in the holidays we read all kinds of books, articles, and magazines. I've been enjoying Andrew Blackwell's Visit Sunny Chernobyl and Other Adventures in the World's Most Polluted Places. I admit this book title may not sound like a relaxing read, but Andrew Blackwell writes about serious topics in a compelling style with a good dose of humour to help the messages get through. 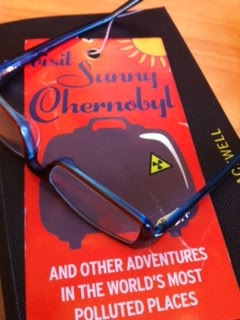 Chapter 1 is a fascinating story about his visit to Chernobyl. And it includes a really good explanation in plain English of nuclear fission.

But Andrew Blackwell's explanation works for me and gives me just the amount of information I need to know right now. It starts like this:


Oh, fission. People make it sound so complicated, but any chump can get the basics. It involves – to skip most of the physics – piling up a giant stack of purified uranium to make your reactor's core. You'll have to mix some graphite in with the uranium, to mellow out the neutrons it's emitting.

We good? Okay. Once you've got the core together, install some plumbing in it so you can run water through to carry off the heat, and then just stand back and cross your fingers.

A few of the uranium atoms in your core will spontaneously split – they're funny that way – and when they do, they'll give off heat and some neutrons. It doesn't matter if you don't know what neutrons are, other than that they're tiny and will shoot off like bullets, colliding with neighboring uranium atoms and causing them to split. This will give off more heat and more neutrons, which will cause still further atoms to split, and so on, and so on, and so on. The immense heat created by this chain reaction will heat the water, which will create the steam, which will spin the turbines at terrifying speed, which will turn the generators, which will create an ungodly amount of electricity, which will be used to keep office buildings uncomfortably cold in the middle of summer.

He then goes on to explain how the control rods work – and what happens when the chain reaction gets out of control.

Notice how Blackwell speaks directly to you, the reader, and uses the active voice rather than the passive. And he tells a story that draws you in and leads to a strong conclusion. He goes on to explain how pulling the control rods out lets the chain reaction begin. Then:


But pull the control rods out slowly, okay? And for the love of God, please – please – put them back when you're done.

Want to buy a copy of Andrew Blackwell's book?

Posted by Anne-Marie Chisnall at 9:55 AM No comments:

We read some great news to start 2013. According to The Spectator, 2012 may have been the greatest year in human history.

From a global perspective, prosperity, economic equality, and life expectancy have grown. There is less poverty and disease. There have been fewer deaths in wars in the past decade than at any time in the previous century.

Gerry McGovern comments that in a media-saturated world, it's easy to sell a story about a horrific car crash. A story about 100,000 people driving safely to work would get fewer readers.

The Spectator's article offers good news that usually flies under the radar. You'll see that their piece attracted flaming comments. But take a look. It could give you a brighter perspective on the year ahead.

Posted by Inez Romanos at 12:23 PM No comments: